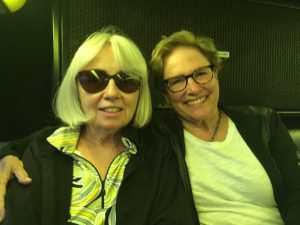 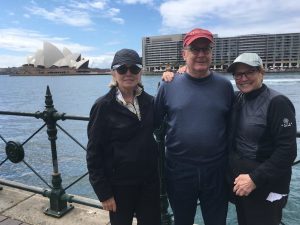 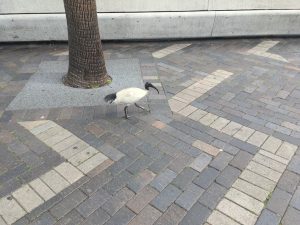 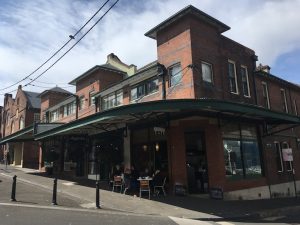 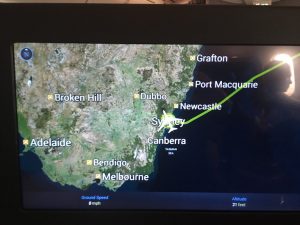 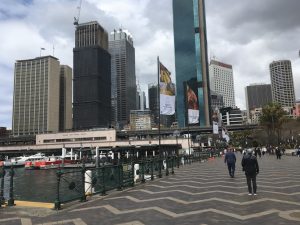 Promptly at 4:00 pm Bruce, Jill and the rented SUV pulled into the driveway at 24 Duke Drive. Out of the house came two suitcases and a backpack being ferried by Annie and Bobby. Momentarily we were off and anticipating the advice of our dear friend nestled neatly on the Waze app on our iPhone. Adhering to her suggestion, we found ourselves leaving the 10 freeway in favor of the 60 freeway. Anyone who has witnessed this journey into Los Angeles knows no further explanation is needed.

Returning the car we jumped on the Hertz bus and were on our way to LAX. Jill and Bruce were flying United and Annie and I were on American. Both flights were scheduled to depart around 11:00 pm, so since we arrived around 7:00 pm we had some time to kill in United’s lounge and American’s Flagship lounge. We said our good-byes on the bus and went in to check in.

We managed a little libation and some food in the lounge and before you knew it, an announcement for Flight 73 to Sydney graced the loud speakers. A brief walk from the lounge to gate 48 and we found ourselves on a new Boeing 787 with all the whistles and bells, and they even offer pajamas.

Fourteen hours and twenty minutes later, accompanied by a restless sleeping night, we landed in Sydney. Clearing customs, grabbing our two bags we headed out of the airport hoping to find Jill and Bruce. No such luck, and after awhile we received a text stating they were in a cab heading for the Argyle Café, a small restaurant directly under the cottage that we will call home for the next six days.

Unable to get into the cottage until 2:00 pm, we made arrangements to store our luggage there while we wandered about, killing time. After some breakfast at the café, we walked down to the Circle Quay where all the Harbor Cruise boats are docked and played the role of tourist. Being fairly close to the Opera House, and since we have ordered tickets for Thursday nights performance of Evita, we thought, why not walk over and pick up our tickets. The walk was great along boardwalk, window shopping along the way. Arriving at the Box Office, we were disappointed to find out that we pick up the tickets on the night of the performance. So, we retraced our steps and headed back to the cottage with a short detour to a liquor store for a little in-home refreshments. Ann and Bruce went off to handle that while Jill and I retired to the bar in the Hotel Lord Nelson, the oldest continuous hotel in Sydney.

While I nursed a Bloody Mary and Jill an Ice Tee, we were joined by Ann and Bruce bearing wonderful fluid type gifts. From there we went across the street and found that our humble abode was now available to us. So, after struggling up a flight of stairs with our luggage, we managed to get settled in.

Tonight it is off the the Sydney Café for a lovely terrace dinner over looking the harbour before falling into bed. But first, not before a nite-cap at the Lord Nelson Bar. More about that in the next blog.