If anyone has driven any or all of those roads, they know the desolation of such a drive, and to be honest, it doesn’t get much better from Flagstaff to Mesa Verde and visual proof of that will be forthcoming in the form of some photos.

The first leg of our trip to Flagstaff held all the excitement of a trip to the dentist. To try and manufacture some excitement I would need the talent of Dostoevsky, who could do three or four pages on someone turning over in his sleep. We did manage one short story of ‘books on tape’ by John Grisham. Even it was depressing.

The bright spot occurred when we reached our hotel in Flagstaff. We arrived at Little America Hotel, where we stayed some thirty years before and were coming back as a slight pilgrimage.   We were grateful that it had been updated extremely well since then and we had a fabulous room.   When first we stayed there we walked across a small forest of trees to a restaurant called, “Black Bart’s”. Primarily a steak house where the waiters were all young college students majoring in theatre. So, singing waiters entertained us while we ate. This time, we were a bit lazy and decided to eat in the hotel and have an early night.

For some reason neither of us slept well and I was up around six thirty, showered and went to the restaurant for some breakfast and also to bring back a croissant and coffee for my loved one. That accomplished, we set off on the second part of the voyage, our trip to Mesa Verde.

If you thought the first part was desolate, try Flagstaff to Mesa Verde, which include such metropolises as Tuba City, Kayenta, Four Corners and Cortez. That said, it also included some wonderful vistas, which my iPhone was incapable of capturing.

Anyway, after another depressing short story by John Grisham on Books on Tape, we arrived at Mesa Verde National Park and headed in to our hotel which is located in the park. After paying for my third ‘Seniors Life Pass’ to all National Parks, we arrived at the Lodge.

I neglected to say that while in Flagstaff, Annie went online and booked a ‘twilight tour of Cliff Palace. So when we arrived around four o’clock we had a few hours to kill before our tour at 7:15 pm.

We ventured to our starting point and met our guide, Ranger Margaret. She ushered us and about ten others down some winding carved out sandstone steps and into Cliff Palace. I will allow the photos to tell the story. 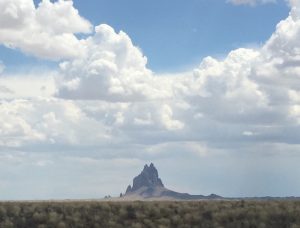 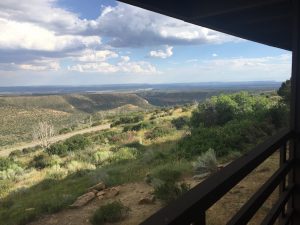 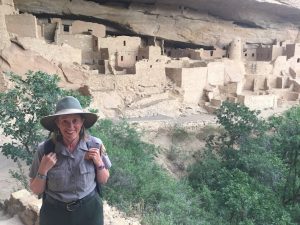 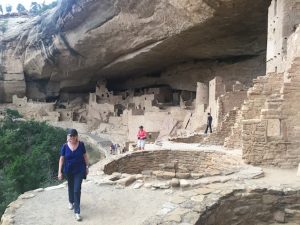 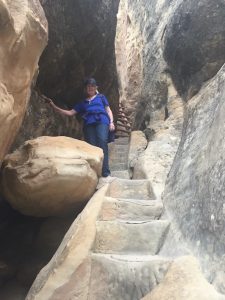 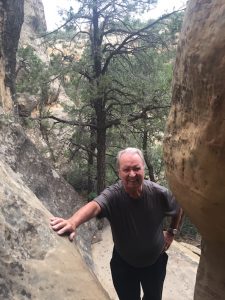 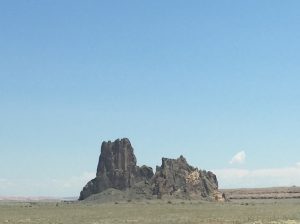 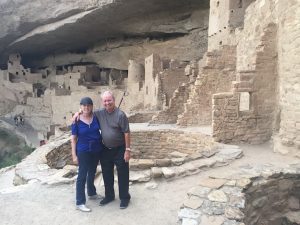 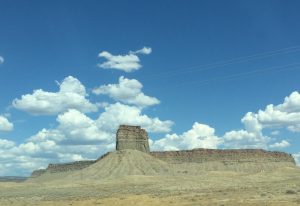 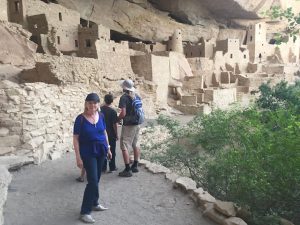