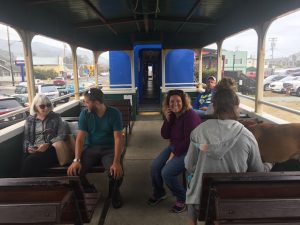 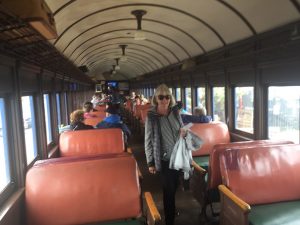 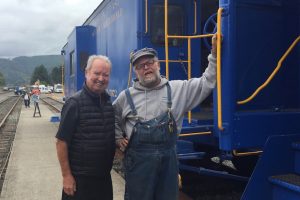 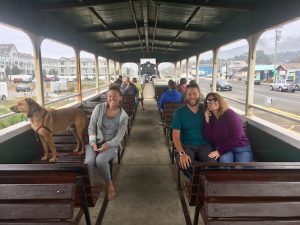 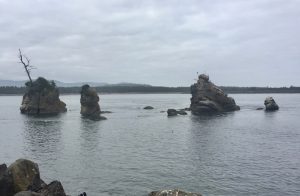 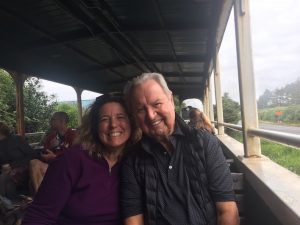 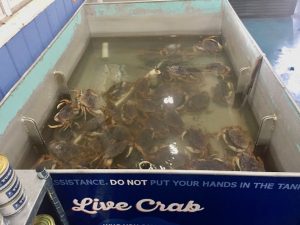 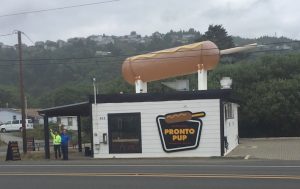 Flying to Portland from Palm Springs requires a plane change, so for a direct flight we decided on a direct flight out of Ontario International.  The trip on interstate 10 was uneventful though that lady who is cramped into my iPhone in Waze, did divert us once to avoid an accident on the 10.  With her help we managed to arrive at the airport an hour and half before the flight.

The flight was okay, about two plus hours, and for the most part was a smooth flight an the seat belt sign was off most of the flight.  I managed to wash down a ham and cheese sandwich from Wolfgang Puck with a diet coke while Ann managed a cheese plate.

Shortly after arriving in Portland we found ourselves at the Budget Rent A Car desk as we prepared for our trip on Interstate 205 South to Oregon City and our hotel, the Rivershore Hotel on the Willamette River.  Because the plane was late getting in, we found ourselves in a moving parking lot on 205 and as a result didn’t get to the hotel until close to five o’clock.

After checking in we headed for West Linn and my daughter, Robin’s home where a BBQ was in preparation.  When we arrived at the house we were met my Robin and her boyfriend Jake, my eldest son, Robert and his wife, Debbie and my grandson, Grant.  All of them were busy preparing the BBQ of chicken, steak, potatoes and mixed vegetbles.  My granddaughter, Caitlyn, arrived about an hour later.

My daughter advised me that the bottle of Tito’s Vodka was in the freezer and was I ready for my before dinner cocktail.  I replied in the affirmative and as a result, the bar for all was open.

Jake and Robert handled the BBQ and the dinner was fabulous.  We sat outside as Portland is in the middle of a ‘heat wave’ and the daytime temperatures were in the 90’s.

Now my apology… my iPhone/camera never left my pocket.  Will make up for it tomorrow.

Up early and checked out of the hotel and then a trip over to Robin’s house where we met up to tandem drive out to Rockaway Beach and our beach house for the next two days.  After a two hour drive through some beautiful countryside (Tillamook Forest) we arrived at our beach house.  A large three bedroom home with all the amenities required.

Tomorrow we leave the coast and drive back to Portland where we will be staying in town close to my son’s apartment.  I think the itinerary includes the Portland Zoo and some gardens on Saturday.  I do know that Annie plans to pay a visit to the open air market sometime on Saturday.  I think Robin and Jake will be coming into Portland on Saturday night for dinner with Robert, Debbie, Annie and myself.

On Sunday Debbie, Robert, Annie and I will be going to a Portland Timbers soccer game.  Hopefully the weather will okay though my daughter tells us that we should expect some rain.

So, until Sunday when we will conclude with Part two of the Portland excursion.