We finally pulled away from 24 Duke Drive. It was somewhat of a hectic departure due to the upcoming remodel. It seems in order to satisfy our contractor’s wishes, it was necessary to 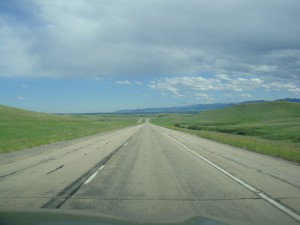 completely empty out our house . We had the movers come the day before and take away a number of boxes that we had packed over the past few weeks and all the furniture to be placed in storage for the four months of demolition and construction. We also decided to store some items ourselves in the office, the one room that wasn’t tainted by all the construction. Those were personal items such as large lamps, wooded carved giraffes and boxes of fragile items, etc. As the hour of departure grew closer it was matched only by our office slowly filling to capacity. As we locked up the fully packed office, it was now time to start our two-week journey to Maine.

The choice of our stops for our journey was pretty much based on daily miles. We wanted to keep the travel time down to about five hours a day.  Our first stop was Mesquite, Nevada, a city east of Las Vegas, which I must admit was somewhat of a mistake. We stayed at a large hotel/casino called Casablanca, which contained little reference to the Bogart/Bacall rendition by the same name. Why was it a mistake? The moment I walked into the casino to the registration desk, a tsunami of cigar and cigarette aroma attacked my senses. It permeated the room. The saving grace of course was that the hotel room and restaurants were smoke free.

After a so so dinner, a good nights sleep, and a few bouts with the slot machines and video poker, we set off with lighter wallets for our next stop, Salt Lake City. If you’ve driven on I-15 to Vegas or Vegas to Salt Lake City, you might equate it to watching paint dry. Looking on the brighter side, we picked up a few “Books on Tape” and we jumped into our first one after leaving Mesquite. It was a 12 hour book by David Baldacci called, “The Whole Truth”. It lasted from there to Sheridan, Wyoming. Will cover that later.

Back to Salt Lake City… not really too much excitement. We arrived at the Marriott Residence Inn, checked in and started thinking about where to go for dinner. We decided after a long drive that we would have food delivered to the hotel room. That was our first mistake…!!! I think I ordered a salad, which I figured they couldn’t screw up…. How wrong can you be…??? Anyway, Salt Lake City was okay and considered a quick stop along the way. After a nice nights sleep we repacked the car and headed for our third location, Butte, Montana. Once again, we watched a lot of paint dry…!!!

You skip through a portion of Idaho on your way to Butte, Montana and I must say that the terrain doesn’t vary that much from Utah. As you get closer to Butte the elevation rises and the terrain becomes a number of Kodak experiences. We had spent some time in Butte before so our tourist inclinations were minimal. Also, a very dear friend, Jack Burke, had arranged to meet us and take us to dinner that night. I mentioned to him that I was going to book a reservation at the same hotel that we stayed in on our last visit to Butte and he said he knew the owner. When we checked in, the reception clerks put us in a lovely suite on the second floor. Thank you Jack Burke…!!!