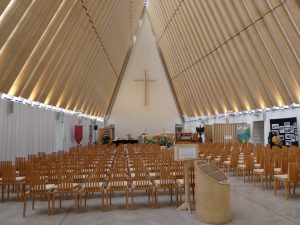 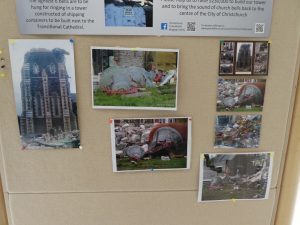 As I indicated before, the earthquake of 2011 destroyed large parts of the city, killing 185 people and injuring a great many.  During that quake, the tower of the original neo-Gothic Cathedral collapsed.  The aftershocks destroyed rose window and cracked the whole Cathedral like a plate.

A few weeks after the earthquake, a Cathedral staff member saw an article in a design magazine about a Japanese “emergency architect called, Shigeru Ban.  After the Kobe earthquake he had designed a cardboard church to replace the one, which had been destroyed.  He visited Christchurch and agreed to design a cardboard cathedral.  In a little over two years the building was completed.

He spent some time studying the natural resources of Christchurch and ultimately he used all local material.  A large business in the city was the manufacturing of tubes, from toilet paper tubes to large tubes used as casts for cement columns.  The tubes were mounted on some kind of machine that allowed them to spin, similar to a lathe.  As they spun around more material was applied until it reached a certain thickness.  Even after that it was determined that they would not be strong enough to hold up the roof, so four laminated beams are fit inside the tubes.  If you look close at what our guide is holding you will see that it isn’t that thick.  They then coat them with some kind of material like polyurethane that makes them impervious to dampness and temperature changes.  The sides of the building were huge storage containers, the kind you see piled on boats and trains.  They also then became rooms within the church.  Once container is a kitchen, another one is the vestry and he showed us one that is a small chapel.  It has a polished concrete floor and a roof that is made of interlocking polycarbonate sheets.

The chairs have an interesting history.  The wood is from a tree that is grown in New Zealand and this particular tree has a very shallow root structure.  In order to survive in the heavy winds, its roots reach the roots of another tree and intertwine with them.  The guide takes from that “everyone coming together”.

Construction was a little over two years and the cost of the building was around six million New Zealand dollars (4.5 million US)

An interesting fact about the triangular stain glass windows on the Cardboard Cathedral is that prior to the earthquake, a photographer decided to photograph the stain glass windows in the neo-Gothic Cathedral.   He photographed all of the windows, including the Rose Window.  When they discovered this, they took his photos and had parts of them transferred onto the triangular panes of glass that now are mounted on the front of the Cathedral.

Close to the front door is a memorial to the church.  It is a three-sided triangle and you can notice the sides made up of trees with their roots intertwined.  The glass top represents water (or snow capped mountains) which give life and hanging from it is Origami prayer papers.

I would recommend a visit if ever you visit Christchurch. 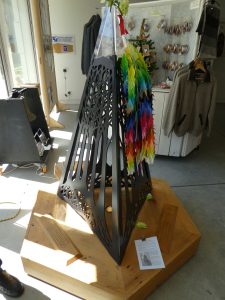 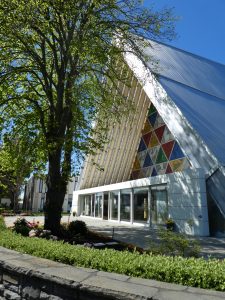 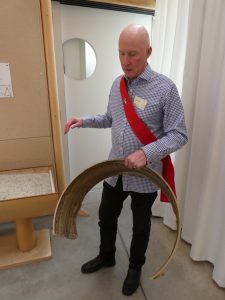