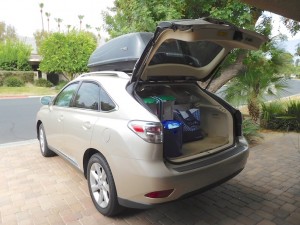 June 26th and early morning…!!! Everything has been selected, so now we are faced with the problem of inserting the round plug into the square hole. Now I know some of you are old enough to remember the 1940 film, “Grapes of Wrath”. Well, as we left Rancho Mirage, the car may have been newer, but we were packed up just as much as that car Henry Fonda was driving in leaving the dust belt of Oklahoma. As an homage to Mr. Fonda, we decided to take some back roads and catch the 15 at Barstow. I think it is faster as the crow flies, however, our Lexus suffers from a lack of wings and considering the number of stop lights it might have been faster to take the 10 to the 210 to the 215 to the 15, which is freeway all the way. 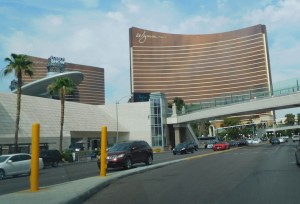 So, stop #1, the Wynn Hotel in Las Vegas. We chose the Wynn as we wanted to see the show that is appearing there, “Showstoppers”. It is what you might describe as the best of Broadway. The show was very enjoyable and the singers and dancers worked their little butts off. Thank you Jeff Beaumont for the suggestion.

After “Showstoppers” Ann and I went down to an outside bar that had a show on a large screen that appeared on the half hour. Somewhat interesting, though able to ingest in all in the time of one drink. However, did enjoy the lighting around the screen so you may be bored with a few happy snaps of that screen.

June 27th again early morning. With Las Vegas receding in our rear view mirror, we leave behind a wonderful experience along with considerable amount of “coin of the realm”…!!! Ah yes, they say you can’t take it with you… hell, we’d just like to keep some while we are still here. So now the five hundred or so miles to Salt Lake City in front of us, we concentrate on country with very few Kodak corners. Hopefully tomorrow through northern Utah and part of Idaho on our trip to Butte, maybe we’ll find moments for some “happy snaps”. Right now, off to bed with an early morning exit.

In reality we are now in Eagle Bend on Flathead Lake. The reason we are behind is because the last couple of days we were at Big Sky Lake enjoying the hospitality of Pat and Bob Sletten and their wonderful cabin did not have internet access. So, now that we are ensconced in our condo, equipped with WiFi, we’re not “online”.