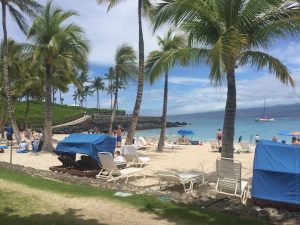 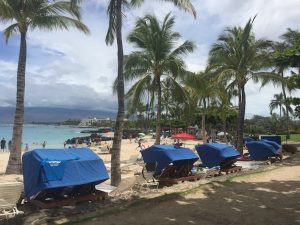 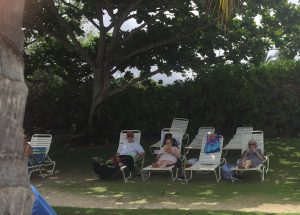 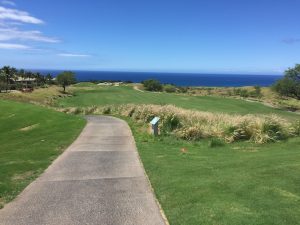 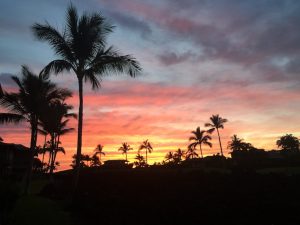 Considering the previous blogs, one would ascertain that all we do here in Hawaii is eat lunch, have a cocktail hour, eat dinner and play golf.  To the one who makes that assertion, they win the prize.  That was true until I mentioned going to the volcano on Monday.

Woke up Monday morning and considering a two hour drive across the island and then a two-hour drive back weren’t too appealing.  So I asked Annie if she would rather stay here and go to the beach.  She, who was, never that enthusiastic about visiting the volcano, jumped at the idea of going to the beach. Actually, the lava flow has cut off some roads that would have allowed you to get closer to the rim, as a result, you now you have to view it from about a half mile away.  So, down to the Beach Club we went, had a nice lunch and then settled into the lounge chairs on the beach.  We were planning on doing some snorkeling, however, the beach boy that you rent the equipment from said the current had made the water murky and viewing was not that great.  So, Bruce read his magazine,
Jill and Annie read their books while I snoozed.  A very quiet relaxing day.

On Tuesday, Jill and Annie dropped Bruce and I off at the Hapuna Golf Course and then they went off to do “Flumin Kohala”.   It is a man-made three-mile ditch that brought water down from the mountain to the sugar Plantations.  It is one of those experiences that you plan on getting very Wet, so unfortunately, there are no ‘happy snaps’.  I would encourage you to Google, “Flumin Kohala”, where you can see a short video of the excusion.

Meanwhile, back at the golf course, Bruce and I had an enjoyable round of golf.  Many of the holes had wonderful views of Hapuna Bay, so in addition to a nice game, we had some very picturesque areas.  I’ll include a few shots
from the round.

Also, last night we had a wonderful sunset and Jill took a great shot which I will include as well.  We followed that sunset with a lovely dinner at the Mauna Kea Hotel.  I believe the restaurant was called, “Manta”.  Tonight we’re bbq at the condo.